The predecessor of the mace was the club. The mace was used until the 16th/17th century. After the introduction of fire arms, the mace was only used for ceremonial purposes or as a sceptre.

This replica depicts a mace that was used in Eastern Europe in the 16th/17th century. Similar maces were used in China and Persia around the year 1000.

A mace is a blunt weapon, a type of club or virge that uses a heavy head on the end of a handle to deliver powerful blows. A mace typically consists of a strong, heavy, wooden or metal shaft, often reinforced with metal, featuring a head made of stone, copper, bronze, iron, or steel. This mace resembles one used in Eastern Europe during the 16th-17th centuries, just as closely as it does some in China from 1009 or Persia around the same period. It features a carbon steel somewhat onion shaped head attached to straight rod with design detail on the head half or the shaft. A leather grip and hanging strap complete this piece.

Historical Period:
Mainly used between the 11th to the 16th century, the mace was the principle weapon using in hand to hand combat throughout Europe. It was commonly hung from the saddle. 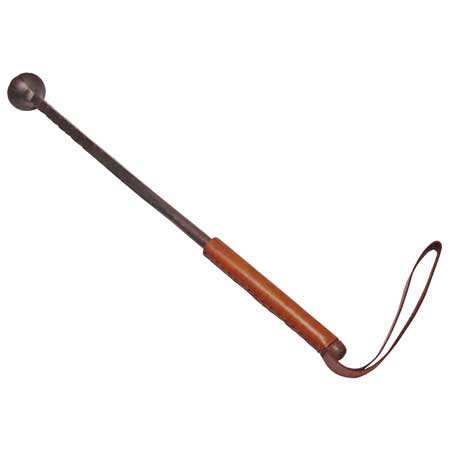